On Friday, two tweets from prominent sources (Fortune and TechCrunch) highlighted opposing views arising in the debate over artificial intelligence. The question is whether it should be regulated. 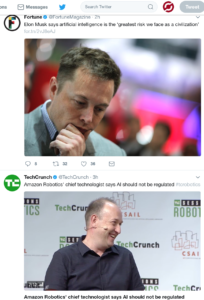 Musk and Amazon’s CTO have very different perspectives on AI.

I’ll just share a quick word today, as soon on SwivelBlog we’ll be releasing a longer treatment on AI. It’s part of our list of the Ten Emerging Markets as Big as the Internet.

Elon Musk’s view, which has gained much attention after he shared it in a meeting of governors, is that AI poses an existential threat and caution is required. Regulation is warranted and strongly advised.

Rodney Brooks thinks Musk does not fully apprehend the present nature of AI. Tye Brady of Amazon Robotics says AI should not be regulated. Experts responding to Musk have painted his view as alarmist.

I won’t render an opinion here without first presenting fuller summaries of the arguments point-by-point. Suffice to say for now, that very heavily invested leaders are saying starkly contrasting things. You will want to understand this issue further, especially if you intend to participate in the emerging market.

Some are saying not to worry; artificial intelligence is going to serve us. Others like Musk caution that the threat is real, and more so now that we are beginning to see it at work. It’s no longer science fiction.

Before you render judgment, consider also that Musk is one of a group of scientists who also see threats in the landscape ahead. Consider, as the Telegraph reported, that physicist Steven Hawking has said, “The rise of powerful AI will be either the best or the worst thing ever to happen to humanity. We do not know which.”

Stay tuned as we post our 10-part series on Ten Emerging Markets as Big as the Internet. Article #1 will focus on VR and AR; Article #2 will cover Robots and Robotics; Article #3 will focus on Artificial Intelligence and its interrelated topics.