Real and unreal worlds are colliding. The lines are beginning to blur, and alternate realities will only come together more in the coming months and years. Is VR finally heading for economic viability? What about AR?

How Real is the Market?

For those who have watched emerging tech for long enough, engineered experiences are not a new concept. The most important advances in both VR and AR were made several decades ago. That’s because it was in the imaginations of inventors and futurists that virtual worlds were ultimately conceived.

In fact, the first virtual experiences were more than a century ago, leading some to suggest that the present market for VR is just an extension of an old fad. But there is a difference, and for leaders today the market is worth following, if not contributing to. 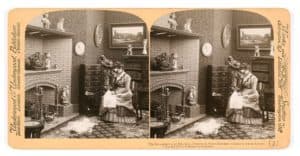 Image: Underwood & Underwood (Library of Congress). A woman uses a stereograph at home.

Queen Victoria was so enamored by the device that its popularity surged:

By 1856, more than half a million viewers had been sold and the vogue spread to America. A new type of device known as the Holmes stereopticon or the American stereoscope was promptly invented by Oliver Wendell Holmes, an open viewer utilising natural light, which would go on to dominate the market between around 1880-1940.”[1]

The Economist notes that VR concepts have fueled “science fiction’s novels and movies since the 1950s.” In the 1960s M. L. Heilig patented devices including a head-mounted stereophonic (audio) unit and a multisensory VR system for a more immersive cinematic experience.[2]

More recently in the 1990s VR had a sort of false coming of age that never fully culminated in the revolution it promised. In 1996 at the fifth World Wide Web Conference in Paris, VRML (virtual reality markup/modeling language) was among the “hot new technologies,” promising 3D worlds online.[3] It became an ISO standard by 1998 when “Both major browsers, Netscape Navigator and Microsoft Internet Explorer” boasted support for the technology.[4]

From this brief look back, it might appear that VR is a fad, albeit persistent. And such skepticism would be warranted only if investors ignore the major differences between the past and the present state of (a) the technology, (b) the experience, and (c) the commercial opportunities now available.

What we learned in the 90s was that the technology was not nearly as impressive as the hype. Gaming consoles like Sega’s VR system induced motion sickness. Poor graphics combined with process latency to cause what one scientist labeled the “barfogenic zone.”[5]

Effectively, you would turn your head, but the lag between your vision and multi-sensory perception created dizziness and nausea. Disorientation turns out to be a bad thing when exploring new worlds.

Today, the gear and platforms available have answered just about every challenge previously faced. In March 2014, the BBC announced that “Oculus has made great strides in reducing – perhaps even eliminating – the motion-sickness problem.” That’s right when Facebook paid $2 billion for the company (in fact, $3 billion with compensation packages).

Even those reporting small latency issues declare that the capabilities are “so close we can taste it.” Legit VR is emerging.

There are two branches of the technology—VR and AR. But in reality there is too much overlapping R&D and investment to completely bifurcate them.

That said, it’s helpful to think of the differences according to use cases. For example, pure VR is popular for total immersion, where the user [typically] remains in one place. Gaming, entertainment, and fully immersive tours and conferencing are examples. Before leaving office, Barack and Michelle Obama gave a virtual tour of the White House via multiple VR technologies.

Commercial and Air Force pilots have been trained on flight simulators for decades, and other industries with high barriers to entry have similarly utilized VR. So we know the technology can be applied in ways that provide measurable benefits. While much of the focus recently has been about fun and games, the potential for VR to be useful in business is real. With technological advances, cost reductions, and economies of scale, the outlook is promising.

For AR, the user can interact out in the real world with technological assistance. Something as simple as heads-up displays for vehicle navigation are an example of AR. So too glasses that augment human capabilities with facial recognition and translation services. Soon, user guides will be overlaid onto complex DIY projects.

Imagine wearing Google Glass and assembling an IKEA kitchen step-by-step, as the company directs your every action. Or arriving on the scene of an accident, calling 9-1-1 and having the operator guide you through CPR visually. The possibilities are extensive.

To quote The Street, VR is “still in the nascent stage,” yet Facebook, Samsung, Sony, HTC and others are heavily invested. With revenues of over $2 billion in 2016, some expect that number to scale more than 10 times by 2020.

Last year, Recode pointed out that Facebook’s acquisition of Oculus transformed the investor landscape, as as “the number of venture capital deals and total dollars invested” in VR and AR technology had tripled.

The markets being disrupted by this technology are already numerous, but there are almost limitless ways in which innovations may be introduced. For now, expect to see continued changes in the following:

Virtual worlds and augmented landscapes appear to be here to stay. Prudent investors may look at a potential 10 times growth target over the next few years and reduce it somewhat in predictive modeling. But even a significantly more modest assessment remains promising.

Could the phenomenon go away? It’s possible. Could it be unprofitable for many? Yes. It’s more likely however that just as the video phone was a failure for nearly a century before becoming part of our everyday arsenal of tools (thanks to Skype, FaceTime, Zoom, etc.), at some point, a sufficient form of the technology emerges. At that point, after enough optimism over its perceived benefits, ordinary people are ready to give it a try.

This article is Part 1 of a series called Ten Emerging Markets as Big as the Internet. Our next market highlight will take a look at robots and robotics. Stay tuned.

[1] Victoria and Albert Museum – Stereographs: http://www.vam.ac.uk/blog/factory-presents/stereographs
[2] MIT Timeline of Wearable Devices: https://www.media.mit.edu/wearables/lizzy/timeline.html
[3] Wired: Fifth International World Wide Web Conference – Paris https://www.wired.com/1996/04/junkets-41/
[4] Wired: VRML Becomes ISO Standard: https://www.wired.com/1998/01/vrml-becomes-iso-standard/
[5] BBC: How Virtual Reality Overcame Its ‘Puke Problem’: http://www.bbc.com/future/story/20140327-virtual-realitys-puke-problem
[6] Université du Québec en Outaouais – Definition of Cybersickness: http://w3.uqo.ca/cyberpsy/en/cyberma_en.htm.
“Cybersickness is believed to occur primarily as a result of conflicts between three sensory systems: visual, vestibular and proprioceptive. Accordingly, the eyes perceive a movement that is out of sync by a few milliseconds with what is perceived by the vestibular system, whereas the remainder of the body remains almost motionless (Stanney, Kennedy, & Kingdon, 2002). Cybersickness can also be caused by factors related to the use of virtual reality equipment (e.g. heaviness of the helmet, closeness of screen to the eyes). Lawson, Graeber, Mead and Muth (2002) note the added possibility that these side effects are also connected to Sopite Syndrome (fatigue due to the movements).”