Robots are rising. No, a dystopian future has not arrived (where terminator-type metallic despots begin ruling the world). Rather, a newly emboldened industry is racing to create a true helper class of intelligent technology, designed to make our lives easier and better. The opportunities available are varied and vast.

In this second highlight of our series of Ten Emerging Markets as Big as the Internet, we’re looking at (a) robots, as creature-like helpers; and (b) robotics, as the industry of hardware and software running everything from auto manufacturing to prosthetic (bionic) limbs and assistive devices.

There is great excitement these days over robots, from autonomous lawnmowers to drones that follow you and document your adventures. There are myriad important advances in all areas of robotics, including better, more cost-effective machinery for manufacturing and new components making possible superhero-like exosuits designed to—among other uses—help stroke victims walk again.

There’s plenty of overlap in robotics and artificial intelligence, but the latter is so enormous in its own right that we’ll focus our next post in this series entirely on the subject of the state of AI, concerns, and opportunities. For the purpose of this article, it’s important to affirm that a big part of the enthusiasm around robotics is precisely because AI has come so far. 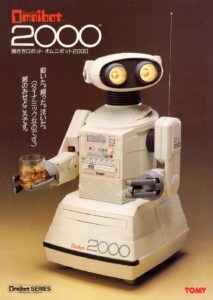 If you were a kid in the 1980s, you likely saw ads for household robots. I personally saw the Omnibot in a popular consumer electronics magazine and can still remember imagining life with my very own droid.

But as PC Magazine wrote, there were good reasons robots for your home did not become a sustainable phenomenon at that time (even though every kid begged their parents for one). Technology was too limited. They promised the ability to pour a drink or lift 1-pound objects, but not much more. And cost to purchase was prohibitive for what they really were—toys.

The main limitations in the 70s and 80s were numerous and gargantuan. Practically speaking, even high-end workstation CPUs were little more than overweight number counters. The first 4-bit 4004 microprocessor by Intel was used to that end.

Voice processing was limited. Actual multitasking was still a pipe dream. Computers weren’t portable—the earliest “laptops” were beasts weighing 25 pounds or more. Robot vision was mostly feigned with eyes that lit up but didn’t “see.” Battery technology was abysmal. Disk and storage devices were pitifully slow and capacities infinitesimally small. And so on.

Today, there is no debating that several factors have combined to make robots of every kind plausible.

Groundbreaking engineering feats in countless STEM disciplines have changed the landscape. The following list is a small subset of the advances that have completely changed the picture and lands us where we are today.

Many are anticipating that Jetsons-like personal robot helpers are not far off. Whatever area of the robot revolution intrigues you most, in order to take advantage of market expansion, it’s important to have less abstract conceptions of what it’s all about, and more firm figures as to growth and significance.

FT reports that with compound growth already at 17 percent annually, “the robot market will be worth $135bn by 2019.”

Remember also that robots and robotics are part of a giant horizontal market, meaning that, like other markets in our list, there are several vertical markets where disruption is occurring in tandem. Some of these include:

It’s an exciting time to be an innovator. The greater robotics market is showing significant opportunities for investment and growth. Even the threats posed to other markets is an education in what to prepare for, to ensure you’re well positioned to take advantage and mitigate against surprises.

There are certainly very real concerns about the emergence of robots, as Musk and others have noted. There is also much hope for what they will allow us to do. Conceivably, robots as assistants is a hopeful enterprise. Theoretically however, robots which learn and are greatly enhanced through artificial intelligence pose concerns as well. We’ll look at this in more detail in our article on AI.

Enough people believe that robots are finally headed for viability in several sectors that VC investments are increasing at an enormous pace. With so much effort underway there is little doubt that marvels of science and discovery are still ahead.

This article is Part 2 of a series called Ten Emerging Markets as Big as the Internet. Part 1 looked at Virtual and Augmented Reality (VR & AR). Our next market highlight will take a look at robots and robotics. Stay tuned.