The study Inventory Driven Costs by Harvard Business Review was written a few years after Hewlett-Packard fundamentally transformed its supply-chain logistics, based on accounting data it was previously incapable of tracking.[1]

The article details problems Hewlett-Packard was having with its PC business.  No small concern, the article informs that, “by 1997, margins on its PCs were as thin as a silicon wafer, and some product lines had not turned a profit since 1993.” The commoditization of the PC industry was affecting all manufacturers, but HP sought opportunity to gain advantage over its competitors.

Key findings of HP’s Strategic Planning and Modeling (SPaM) group led to the company’s supply chain transformation, division by division. SPaM initially found that the nonalignment of supply and demand for the entire PC business was to blame for surplus inventory. Executives were insufficiently informed by antiquated management-accounting metrics, which “had failed to keep pace with the evolution of its supply chains.”

SPaM parsed at least five inventory-driven costs (IDC), four of which had not appeared on radar before as significant. Holding Cost was named as the most obvious, but one less significant in scope than the others.  The four previously evading detection were:

First and foremost, Callioni and team show that devaluation was responsible for the largest portion of overall inventory costs.  Decreases in component prices from suppliers, while inventories were high, meant that HP was eating losses.

Due to the nature of the PC business’ rapidly declining costs on items such as CPUs and RAM, HP was forced to reimburse channel partners holding stocks that had not sold. The article elaborates, “A channel partner might buy a product from HP when the prevailing market price was $1,000. But if the item sold five weeks later at a new price of $950, HP had to reimburse the $50 difference.”

Similar to price protection costs, product returns were entire reimbursements by HP of its distributors on products they were unable to sell.

Incredibly short lifecycles for PC products meant that in cases where demand and supply were poorly aligned, HP was forced to multiply write-offs.

When elements of inventory costs were taken together, it was difficult to know where to focus attention.  In the article, the authors provide examples of the clear picture that emerges once costs are separated out.  When three products are evaluated side by side (See Table 1), “the highest costs for product A are coming from goods whose prices have dropped after they’ve been shipped to retailers.  But the greatest problem for products B and C are drops in component prices before the products ever get out of the factory.” 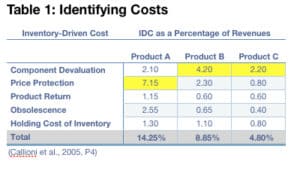 With this new information, SPaM was able to work with HP business units, starting with the Mobile Computing Division (MCD).  Former accounting metrics were exchanged for measurements operating on a more granular level of detail. MCD eventually opted to centralize manufacturing and configuration at a single location based on an opportunity comparison using the new metrics (See Table 2).  The success of the initiative was so far reaching that the program was eventually standardized, and adopted enterprise-wide. 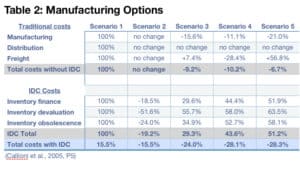 SPaM made known their findings about the true drivers of HP’s inventory costs in 1997.  In 1998, after implementation, margins were already increasing for MCD. By 1999, the unit returned to profitability.  In May of 2002, HP and Compaq merged and the new metrics were maintained.

According to Inventory-Driven Costs, HP has catapulted forward through its shift in focus from a strategy of return on sales, to return on net assets (RONA), a change supported by new accounting metrics.

Though the article focuses on HP, aspects of the full scope of changes acted upon by the company mirror that of others in the industry. Dell’s success through the 90’s, for example, was due in part to a strategy of minimizing the steps in its supply chain and managing the variability of supply and demand[2]. Dell has utilized return on invested capital (ROIC), which similarly focuses on “high returns at very low asset intensity.”

While Inventory-Driven Costs points to IDC metrics as the catalyst for HP’s change, it’s possible to arrive at the general conclusions of management by other means. In fact, the authors concede, “Product group managers may well have known before, on an intuitive level, what they needed to do, but the IDC metrics have made it easier for them to convince senior managers that their particular situations require particular solutions.”[1]

In light of this, another factor emerges—that of managerial culture and decision-making. In an organization such as HP, where management decisions are evidently more closely linked to accounting metrics, the inventory-driven cost method goes a long way to ensuring management objectives are carried out. This is especially true if managers are not otherwise empowered to make decisions based on what they know to be true. IDC has contributed to that empowerment, where previously a manager might have been reprimanded, even for making the right decision.

When Carly Fiorina was installed as CEO, she sought to bring about major change to HP culture.  Prior to HP’s acquisition of Compaq, she was convinced that dramatic improvements were still needed.  “Only a major acquisition, she concluded, could disrupt entrenched routines and catapult HP into a commanding lead in the personal computer industry.”[3]  Indeed signs of successful changes at all levels continued with the merger. Susan Bowick, of the management team formed to lead the company’s integration of people, said of the experience, “To my knowledge, no global company of HP’s size had ever integrated their organization, all HR practices and HR technology in less than 12 months. Many of us felt that it was one of the best projects and best teamwork examples of our career.”[4]

When speaking of the conditions for success at Dell, Thomas Stewart and Louise O’Brien wrote that “High expectations and disciplined, consistent execution are embedded in the company’s DNA.  Dell is more than an efficient factory—it’s an organization that can turn on a dime and that has demonstrated impeccable timing in entering new markets.”[2]

A Model for Other Companies

In addition to accounting efficiencies, any company must work to develop teamwork, management instinct and adaptability. It’s important to note the many changes leading to HP’s leadership in the PC business, of which a very critical element has been IDC. Providing managers with latitude along with the right tools to enact change is imperative.

In times of economic instability or recession, the IDC method, in the right management conditions, gives business units a lever to persuade senior managers of required changes, even dramatic supply chain restructurings like HP’s. Such adaptive strategies would hardly find favor in a poor climate based on intuition alone.

HP has won the battle to manage profits and inventory in several circumstances, but there have been challenges. In the first quarter of 2009, the company announced its profits would decline as much as 5% from the previous year.[5] It will surely maintain its metrics and closely monitor results, ensuring that excess costs are avoided. Any organization evaluating inventory-driven costs however, would do well to contextualize HP’s success and recognize the compound drivers of effective decision-making.

Lastly, it is important to remember what the authors point to almost from the outset. That “Mismatches between demand and supply” are the cause and surplus inventory, the effect.[1]

As long as IDC metrics are focused on decreasing that elasticity, it should continue to be effective. Overall, Inventory-Driven Costs is an impressive look at one very helpful tool for the 21st century manager of any “highly price-competitive industry.”[ibid]